Japan is at the top of the list for life expectancy and health. There are strong regional variations although the diet in recent decades has become more westernised and the variations in diet are becoming less distinct throughout Japan.1

A wide variety of dipping sauces accompany most meals. Udon is a thick wheat flour noodle and yakisoba is a buckwheat noodle. Soba is the Japanese name for buckwheat.

Despite the increase in dairy, egg and meat consumption in recent decades, Japan (according to the National Health and Nutrition Surveys) still consumes a predominately plant-based diet.

Australia and the US consume approximately 30% of their diet from plant-based sources.

Hokkaido is the northern most island of Japan. The winters are icy with most rivers freezing.

Tohoku is the northern part of Honshu consisting of the prefectures of Aomori, Iwate, Miyagi, Akita, Yamagata, Fukushima.

Kanto is the region around Tokyo and to Tokyo’s north-west consisting of the prefectures Saitama, Chiba, Tokyo, Kanagawa, Ibaragi, Tochigi, Gumma, Yamanashi, Nagano.

Tokai (or Chubu) region os to the south of Tokyo consisting of Aichi, Gifu, Mie and Shizouka.

Kansai (or Kinki) is the region in and around Osaka in southern Honshu consisting of Kyoto, Osaka, Hyogo, Nara, Wakayama and Shiga.

Chugoku is in western Honshu consisting of the prefectures Yamaguchi, Shimane, Okayama, Hiroshima and Yamaguchi.

Shikoku is the island south of Honshu consisting of Tokushima, Kagawa, Ehime and Kochi.

Kyushu is the island south of Shiloku, the smallest of Japan’s large islands. It consists of Fukuoka, Saga, Nagasaki, Oita, Kumamoto, Miyazaki, Kagoshima as well as the archipelago of Okinawa.

Although Okinawa is a part of South Kyushu, their isolation ensures that diet and culture is distinct from the rest of Japan. Okinawans have one of the healthiest populations on earth, exceeded only by vegan southern Californian Seven-day Adventists.

Okinawa prefecture is an archipelago consisting of 160 islands south of Kyushu that extends for 1,000 kilometres (620 mi) to the east of Taiwan.

Japan’s National Health and Nutrition Surveys (NHNS) are the oldest national health surveys conducted. The NHNS commenced after World War II to investigate the health of the Japanese population that were suffering food shortages as a result of the war. 2

Full nutritional surveys by prefecture are rarely undertaken. The data discussed below is from the year 1980. 3

The NHNS has defined 12 dietary regions which are described below. Below are maps of the distribution of selected food items within the Dietary Regions in the year 1992. The data refers to the regions and not the prefectures. Data for individual prefectures were not available.

Okinawa diet is higher in seaweed, spices, herbs, beans (soy, tofu and other lentils), root vegetables, yellow & green vegetables. They consume less pickles, salt-dried fish and fish than the other prefectures in their region. 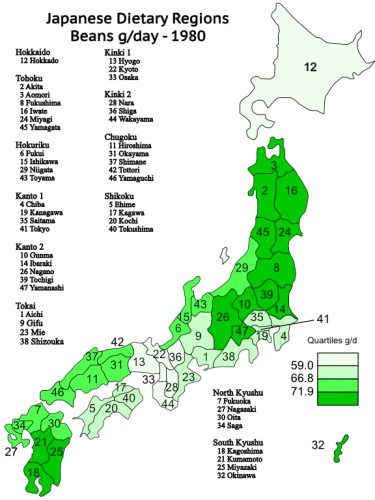 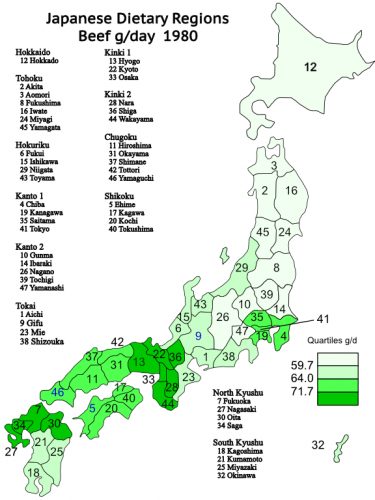 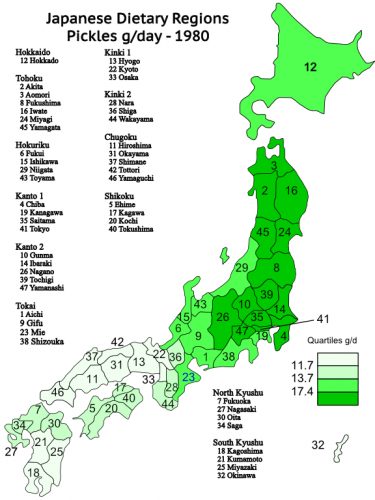 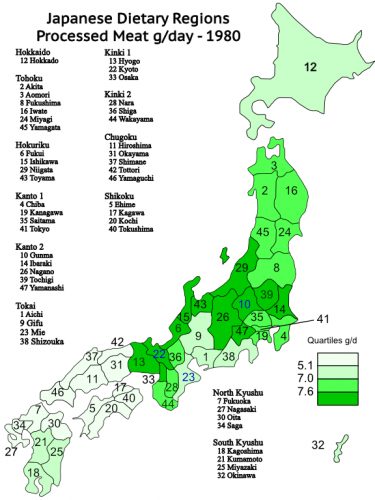 Below is a table that shows how the Japanese diet has changed since the 1970s. 4 5

There are some (but not many) substantial differences of mortality within some regions. For example: 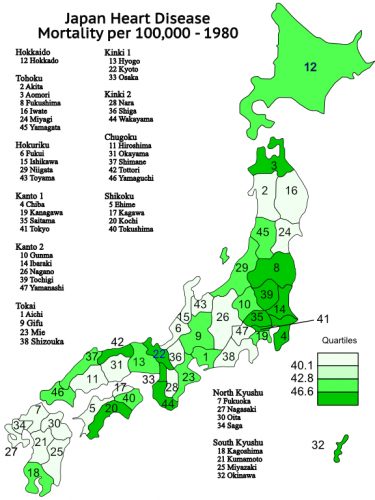 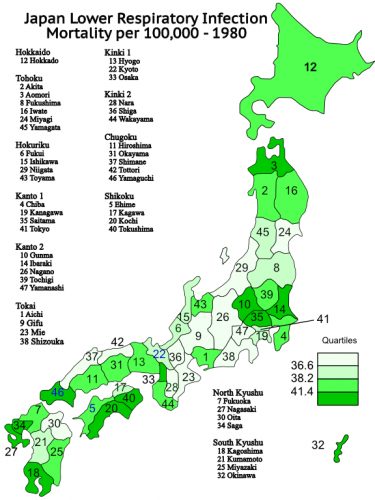 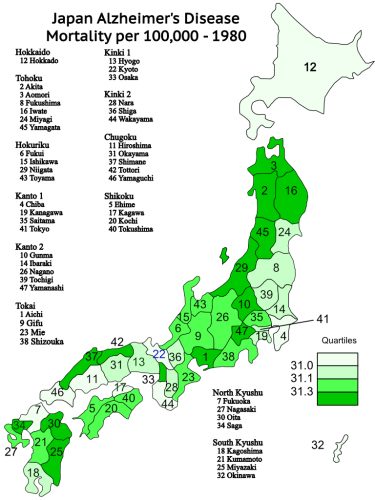 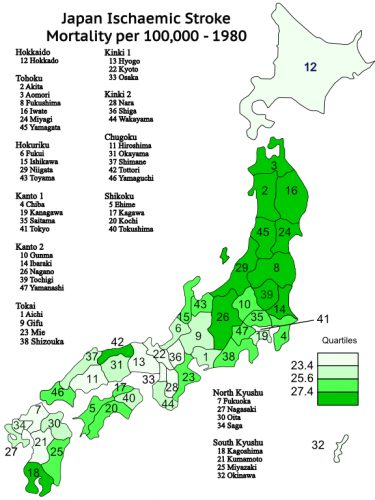 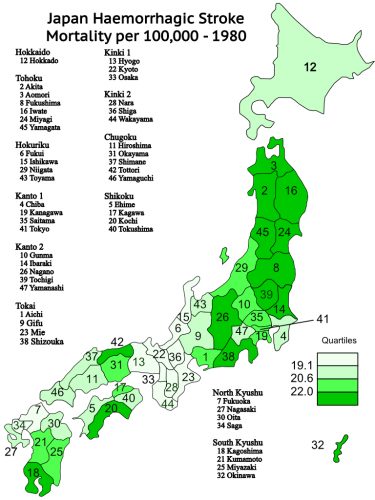 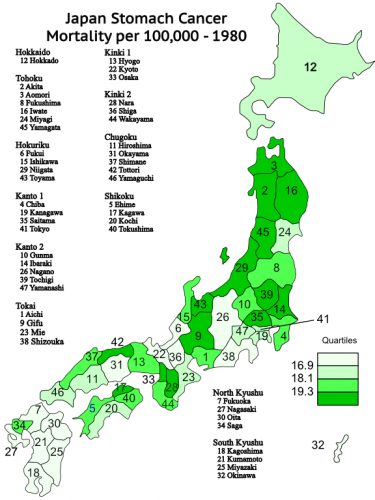 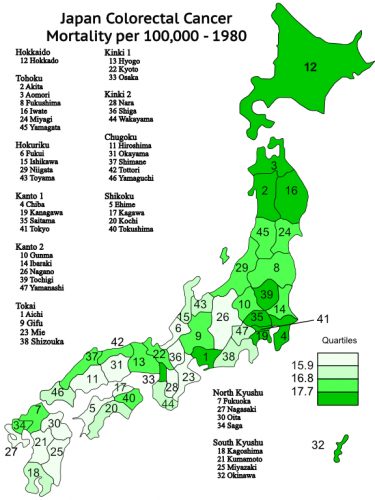 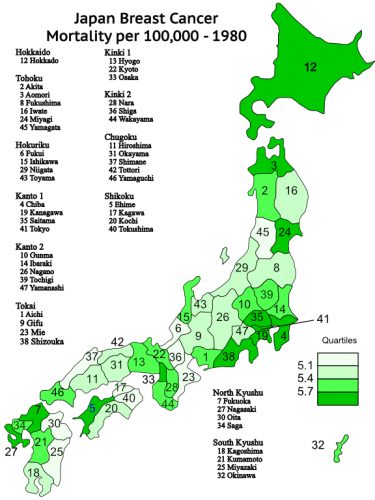 Correlations with Diet and Mortality Rates

In the 1970s, Japan had one of the highest stroke mortality rates. Average blood pressure reached its peak in the 1960s. 8

Recommendations for Consumption of Salt

Most international recommendations are based on sodium rather than salt which is confusing. Salt contains is 40% sodium. 1 g of sodium is approximately 2.5 g of salt which is equivalent to ½ teaspoons (2.5 ml) of salt.

Most recommendations are to limit salt to 5-6 g per day which is close enough to 2 teaspoons of salt per day.

Japan's intake of salt is approximately 10 g/day which has been reduced significantly since the 21 g/day in the 1950s.

The maps below show 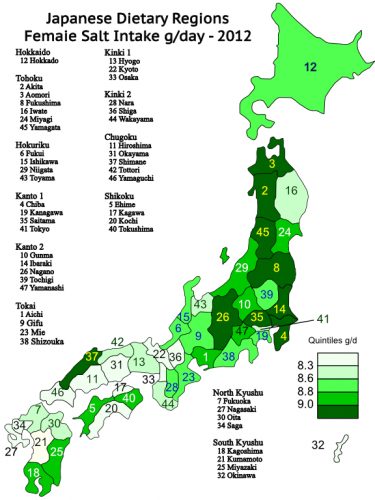 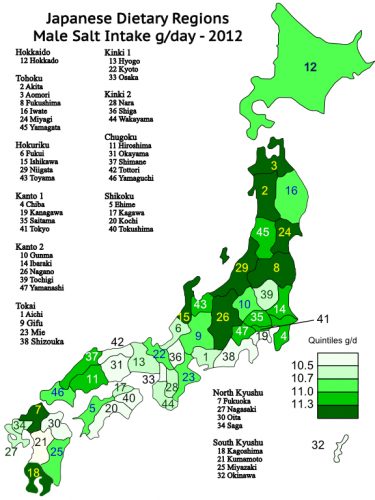 Most of the sodium in our diets come from processed foods. Removing the salt grinder from the dining table usually does not reduce the salt intake a great deal.

Most chicken is injected with a salt solution which often results in salt levels of 1g per serve. A rotisserie BBQed chicken breast can contain 8 times more salt.

Producers have been injecting chicken with salt water since the 1970s. As well as making the chicken more succulent and tastier it is a cheap way of increasing the weight of chicken.

Chicken is not even at the top of the list for high salt foods.

According the Centers for Disease Control and the American Heart Foundation, the top 15 salt containing foods in the US are:

The sodium to potassium ratio appears to be even more important than sodium. Potassium increases the amount of nitric oxide in the blood nitric oxide where as sodium reduces it. Nitric oxide dilates arteries. There is less sodium and more potassium in plant-based foods. A high-sodium meal (a normal, everyday meal) impacts arterial function within 30 minutes. 9

This study used data from the 1980 survey and to evaluate the impact of dietary sodium and potassium ratio on mortality from of stroke, cardiovascular disease and all causes, using 24-year follow-up period. It did not take into account changes that participants may have made during that period.

Foods high in potassium include:

Comparisons with Other Countries

ICD-10 is the International Statistical Classification of Diseases and Related Health Problems. ICD-10 allows diseases to be classified with multiple levels of subcategories. The ICD-10 codes used to define the top-level categories are different to those employed below.

The ranking shown is out of 183 countries. When Japan is ranked 183 from deaths from hypertension (blood pressure diseases), it has the world’s lowest mortality rate.

Japan does perform poorly for pancreatic cancer (23), stomach cancer (23), colorectal cancer (39) and lung cancer (69). Smoking rates are much greater in Japan than Australia, Canada, US and the UK. 10