Ancel Keys did not manipulate his data

This study is sometimes referred as the “Six-Countries Study”. A number of popular commentators think this is the Seven Countries Study— they count England & Wales as two countries.

This paper was presented in Amsterdam in 1952 and in January 1953 in New York.

On page 4 of this paper, Keys lists 16 countries (which includes France, The Netherlands, Switzerland, and Sweden) and compared their all-cause death rates to the United States. United States compared unfavourably to all countries and Keys believed that what was possible for other countries “should be possible for Americans.” The mortality data was for the years 1947– 1949.

The only countries that have a higher all-cause mortality rate for males are South Africa for 50-54 years old and Portugal for 40-44 year old which have mortality rates of 102% and 139% of the US mortality rate respectively. The increase in Portugal’s mortality rate is attributed to tuberculosis and violence.

On page 17 of this 22-page paper, Keys graphed the mortality rate for degenerative heart disease and fat intake for six countries that he stated had “fully comparable dietary and vital statistics data.” The food data was obtained from FAO for the year 1949.

This graph causes a great deal of consternation in the popular press. The claim is made that Keys “cherry-picked” his data, which is stating that he was dishonest.

Yerushalmy and Hilleboe criticized this paper in the publication Fat in the Diet and Mortality from Heart Disease, 2 claiming that Keys only choose 6 countries (Japan, Italy, England & Wales, Australia, Canada, U.S.) that supported his hypothesis instead of using the World Health Organization data from the 22 countries that was available. The data for the 22 countries that Yerushalmy and Hilleboe listed were for the years 1951-1953, a period which is after the publication of Keys’s paper.

Even if data from all the 22 countries are included, it still shows:

Using the data supplied by Yerushalmy and Hilleboe for all of the 22 countries, it shows the following Pearson’s correlation coefficients with category B-26 of heart disease. Y&H used rank correlations – not linear correlations.

Taubes, Teicholz and other popular commentators ignore the fact that Yerushalmy and Hilleboe found the greatest correlation with the percentage of animal protein and heart disease. Once again, that is simply being dishonest. (Note the difference is insignificant – and saturated fat and animal protein are often found in the same food.)

In the book The Big Fat Surprise: why butter, meat, and cheese belong in a healthy diet, Nina Teicholz claims that, 3

This connect-the-dot exercise in 1952 [The “Six-Countries Study”] was the acorn that grew into the giant oak tree of our mistrust of fat today. All of the ailments that have been ascribed to eating fat over the years— not just heart disease but also obesity, cancer, diabetes, and more— stem from the implantation of this idea in the nutrition establishment by Ancel Keys and his perseverance in promoting it. Now, as you eat a salad with a lean chicken breast for lunch and choose pasta over steak for dinner, those choices can be traced back to him. The influence of Keys on the world of nutrition has been unparalleled.

Homemade minestrone; pasta in endless variety always freshly cooked, served with tomato sauce and a sprinkle of cheese, only occasionally enriched with some bits of meat, or served with a little local sea food without any cheese; a hearty dish of beans and short lengths of macaroni (pasta e fagioli); lots of bread never more than a few hours from the oven and never served with any kind of spread; great quantities of fresh vegetables; a modest portion of meat or fish perhaps twice a week; wine […]; always fresh fruits for desert. 4
The heart of what we now consider the Mediterranean diet is mainly vegetarian [or lactovegetarian]: pasta in many forms, leaves sprinkled with olive oil, all kinds of vegetables in season, and often cheese, all finished off with fruit, and frequently washed down with wine. I say “leaves.” Near our second home in southern Italy, all kinds of leaves are an important part of the everyday diet. There are many kinds of lettuce, spinach, Swiss chard, purslane, and plants I cannot identify with an English name such as lettuga, barbabietole, scarola, and rape. 5

Below are extracts from Teicholz’s book as she tries to justify her argument that Keys manipulated his results. The data that Teicholz has added is shown in red text. It is clear that it is from a completely different set of data to that supplied by Keys. Teicholz has added data for Great Britain for the years 1951-1953 whilst Keys used data for England and Wales for the year 1949 supplied by the Food and Agriculture Organization of the United Nations. The 22 countries that is frequently cited comes from Yerushalmy and Hilleboe.

If you go back to the original Food and Agriculture Organization document for the year 1949, you will discover that there were actually 36 countries available. Perhaps we should be asking why Yerushalmy and Hilleboe only included 22 countries. No – not really, it is irrelevant. 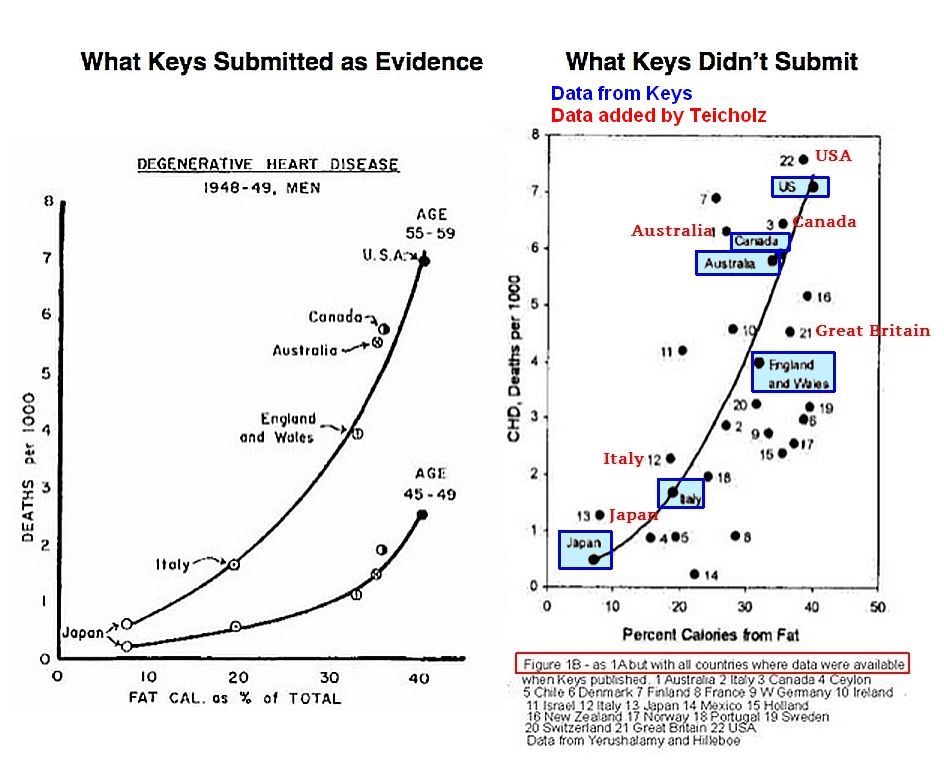 Teicholz has changed the date in the heading from Males aged 50-59, 1951-1953 to 1950 so it fits with her chronology of Keys’s deception. That can be only described as being dishonest. Clearly this data was not available to Keys as he first presented his talk in Amsterdam in 1952.

The “Six-Countries Study” was a minor discussion paper that was ignored until Gary Taubes discovered it to criticise Keys in the book, Good Calories, Bad Calories in 2007. 6

A common accusation regarding Keys is that he made his claims without the benefit of studies. There are numerous studies both before and after this paper performed by Keys and other researchers.

Some examples are listed below.

In 1951, Keys was working at Oxford when the Food and Agriculture Organization asked him to chair their first conference on nutrition in Rome. He states, “The conferees talked only about nutritional deficiencies”. When he asked about the new epidemic of coronary heart disease, Gino Bergami, Professor of Physiology at the University of Naples, said “coronary heart disease was no problem in Naples”.

In 1952, Keys and his wife Margaret visited Naples. Margaret measured serum cholesterol concentrations and found them to be very low except among members of the Rotary Club. Heart attacks were rare except amongst the rich whose diet included daily servings of meat. He obtained similar results in studies in Madrid.

The Seven Countries Study compared 16 contrasting regions in 7 countries which was carried out during 1958-1970. 13,000 men aged 40-59 participated with 95% of eligible men taking part. 15 local collaborators performed surveys – not Ancel Keys.

Below are two commentaries by self-styled health experts.

The misguided belief that saturated fats cause heart disease is rooted in a famous study published in 1970 called “The Seven Countries Study”, in which renowned scientist Ancel Keys claimed that people in countries where more animal fat was eaten had more heart disease than people in countries where less animal fat was eaten. The original study actually involved 22 countries, not 7; the data from the other 15 countries having been omitted for undisclosed reasons. When the data from all 22 countries were analyzed, no correlation between fat and heart disease was found (Yerushalmy and Hilleboe 1957).

Both are completely confused. Ede states that the Seven Countries Study was published in 1970 but claims that when Yerushalmy and Hilleboe examined the data that they found no correlation between fat and heart disease. Yerushalmy and Hilleboe’s paper was published in 1957. The Seven Countries Study did not involve 22 countries. It involved 16 regions in 7 countries.