It is with alarm that I read Bryan Walsh’s article Ending the War on Fat that was published in TIME magazine on 23 June 2014. 1 According to Walsh,

Keys’ work became the foundation for a body of science implicating fat as a major risk factor for heart disease. The Seven Countries Study has been referenced close to 1 million times.  But Keys’ research had problems from the start.  He cherry-picked his data.

Walsh claims that Keys “cherry-picked” his data. It is evident that Walsh has confused with Keys’ 1953 paper Keys’ paper, Atherosclerosis, A Problem in Newer Public Health and his later study Seven Countries, A Multivariate Analysis of Death and Coronary Heart Disease.

Walsh fails to elaborate on how Keys “cherry picked” his data. Commencing in 1957, the Seven Countries Study studied 12,763 men in 16 regions in seven countries. What data was omitted from this study? How was the data “cherry-picked”?

Keys collaborated with a number of highly regarded researchers, people who spoke the native language of the areas studied.  He lists 15 collaborators in the Seven Countries book.  According to Henry Blackburn, 2

At this time, Keys’s match­up with great clinicians completed the picture – such leaders as Paul Dudley White of Boston, Vittorio Puddu of Rome, Noboru Kimura of Japan, John Brock of Capetown, Martti Karvonen of Helsinki, and Christ Aravanis of Athens. All saw beyond the clinic and beyond the individual patient – to the origins of common diseases – in the population and in society.

Paul Dudley White was a highly regarded and renowned cardiologist and is frequently viewed as a leader in preventive cardiology.

TIME magazine article contends that Keys manipulated data for his own purposes and at the same time managed to deceive for decades his collaborators who actually collected the data.

Popular commentators frequently falsely accuse Keys of manipulating data in his 1953 paper, Atherosclerosis, A Problem in Newer Public Health. In this paper, Keys lists death rates from 16 countries for the period 1947-1949.   He excludes some of this data for reasons that are explained.

Jacob Yerushalmy and Herman Hilleboe examined the data from 22 countries (33 were available) in the WHO Epidemiological and Vital Statistics 1951-1953 publication.  The results were published in their paper Fat in the diet and mortality from heart disease.  In this paper, Yerushalmy and Hilleboe criticise Keys for excluding data in his considerations.  Note that Keys’ paper was presented in January 1953.  An earlier version was presented several months earlier in Amsterdam.  Yerushalmy and Hilleboe used World Health Organisation data from the years 1951-1953. Does it need to be explicitly stated that Keys’s paper was written long before the WHO data was available?

Please, please note that even if data from all the 22 countries are included, it still shows:

This point is clearly stated in Yerushalmy and Hilleboe’s paper, but it is unfortunately omitted from Walsh’s article.

Norman Jolliffe and Morton Archer wrote a paper, Statistical associations between international coronary heart disease death rates and certain environmental factors. (Journal of Chronic Diseases  9 No 6, 1959) that examined Yerushalmy and Hilleboe’s conclusions. Jolliffe and Archer state that Yerushalmy and Hilleboe erred in disregarding the distinction between saturated fat and polyunsaturated fat. This distinction was not known when Keys wrote his original paper.

Jolliffe and Archer state that,


the intake of saturated types of fat was most important in accounting for the differences in coronary heart disease death rates. Of somewhat lesser importance, the intake of animal protein also accounted for a large proportion of the explained variance in these death rates.


Keys highlighted the Greek island of Crete, where almost no cheese or meat was eaten and people lived to an old age with clear arteries. But Keys visited Crete in the years following World War II, when the island was still recovering from German occupation and the diet was artificially lean. Even more confusing, Greeks on the neighboring isle of Corfu ate far less saturated fat than Cretans yet had much higher rates of heart disease. 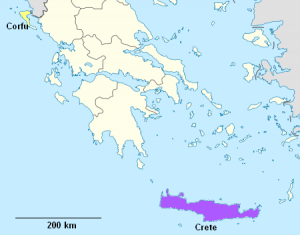 Corfu and Crete are separated by over 600 km of ocean and dozens of islands – it is not a neighbouring island. 3 Surveys for the Seven Countries Study were conducted in Greece in 1960 and 1965. This is clearly not in the years immediately following World War II. It is false to state that the diet was “artificially lean”. It is simply not true that “almost no cheese or meat” was eaten.

Walsh claims that people of Corfu ate far less saturated fat than the Cretans. Where did this information come from? Below is a comparison of data from Crete, Corfu and East Finland with 10-year death rates. 5

The amount of saturated fat consumed was very similar. Cretans ate more fat, in the form of olive oil.

The number of heart disease deaths for both Crete and Corfu were very low.

The focus on any one component of a diet such as saturated fats or sugars is misleading.


The heart of what we now consider the Mediterranean diet is mainly vegetarian: pasta in many forms, leaves sprinkled with olive oil, all kinds of vegetables in season, and often cheese, all finished off with fruit, and frequently washed down with wine.
Ancel Keys and his wife Margaret lived a village in southern Italy for 28 years. Keys lived to be 100 years old and his wife 97.

There is a reference in Walsh’s article to papers by Patty Siri-Tarino and Rajiv Chowdhury. Walter Willet, Frank Hu, Stewart Truswell and Jeremiah Stamler have raised serious concerns regarding the conclusions of these papers. In some cases, Siri-Tarino and Chowdhury have managed to draw the opposite conclusions to the facts presented in the original papers that they reference.

Much of this poorly researched article is based on popular books and does not stand up to scrutiny. Many popular books confuse the Seven Countries Study with the earlier 1953 paper.

A number of “experts” quoted in the article are supporters of the Atkins Foundation, promoters of a high fat, low carbohydrate diet that has been shown to be a considerable health risk. Stephen Phinney, Jeff Volek and Eric Westman are authors of The New Atkins for a New You, written on behalf of Atkins Nutritionals, an organisation committed to “groundbreaking work in the area of low-carb living.”

Robert Atkins died at the age of 72, obese and with a history of cardiac problems.

According to a review in 2003 review in the Journal of the American College of Nutrition,

When properly evaluated, the theories and arguments of popular low-carbohydrate diet books … rely on poorly controlled, non-peer-reviewed studies, anecdotes and non-science rhetoric. . . . A closer look at the science behind the claims made for these books reveals nothing more than a modern twist on an antique food fad.
Journal of the American College of Nutrition

Bryan Walsh has performed a great disservice to TIME magazine readers by presenting popular views that have now become “facts”.

2040 Documentary
Pop Psychology, Alice and the Concept of Evil
The Pioppi Diet
What is the Problem with Wheat?
Wheat and Inflammation
Impact of a Gluten-Free Diet
Wheat and William Davis
Glucose Tolerance
When Vegan Diets Do Not Work
7th-day Adventists and Moderation
Taiwan, Buddhists and Moderation
Worried about eating eggs?
CSIRO and Egg Consumption
Rheumatoid arthritis
Rheumatoid Arthritis and Fibrin
How Cooking Changed Us
Deception from The BMJ