A fund-raising BBQ is a popular way of obtaining money for research into common cancers, in particular prostate and breast cancer.

Heterocyclic compounds consist of one or more ring structures that contain different elements. In heterocyclic amines (HCAs) one of those elements is (usually) nitrogen. Pyridoxine (vitamin B6) is a HCA so not all HCAs are toxic.

Toxic HCAs are formed from cooking red meat on high temperatures and can also be formed during the smoking of meat. They are created when amino acids, sugars and creatine or creatinine (found in meat) react. 1 PhIP is one of the most abundant HCAs in cooked meat. HCAs are have a concentration that is measured in parts per billion in grilled and BBQ meats.

Polycyclic aromatic hydrocarbons (PAHs) are compounds consisting of only carbon and hydrogen that consist of multiple aromatic rings. They are produced by the incomplete burning of organic matter. There are several hundred compounds with varied degrees of toxicity. A number of PAHs are found as contaminants of vegetable oils. 2

Nitrosamines are another group of carcinogens that are found in processed meat, particularly fried bacon. It is formed from sodium nitrate or sodium nitrate that is added as a preservative and prevents the growth of bacteria. They are also found in tobacco smoke.

In October, 2015, 22 scientists from ten countries met at the International Agency for Research on Cancer (IARC) in Lyon, France, to evaluate the carcinogenicity of the consumption of red meat and processed meat. Processed meat includes bacon, ham, hotdogs, sausages, salami, corned beef and canned meats. Processing can include smoking, salting, curing, canning, preserving and fermentation. Sodium nitrate (E250) is used as a preservative. 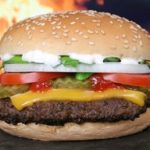 In addition to the problems with consuming processed meat, high-temperature cooking introduces additional dangers. Even the smoke from BBQs or living nearby a restaurant can cause health problems. If you are pregnant, it is advisable to stay clear of BBQ smoke. Airborne products from frying hamburgers, bacon and soybean burgers were tested for mutagenicity (the ability to change DNA). The fumes generated by frying pork and beef were mutagenic but the soy burgers were not.

Cooking meat produces PhIP which is one of the most abundant HCA in cooked meat. This induces cancer of the colon, prostate and mammary glands in rats. PhIP has also been implicated in the initiation and progression of breast cancer in humans. 6 7

A 2011 paper investigated the consumption of red meat as well as cooking methods on prostate cancer. 8

Their findings showed that a weekly consumption of:

were each associated with an approximately 50% increased risk of developing advanced prostate cancer when compared with men who ate no red meat.

A similar conclusion was reached in regard to breast cancer in the following paper. Consumption of processed meat, fried and stir-fried meat and HCA intake were correlated with the level of DNA adducts in breast tissue. 10

The popularity of fund-raising BBQs for cancer research is somewhat disturbing given the many damaging effects of consuming BBQed meats.
PDF