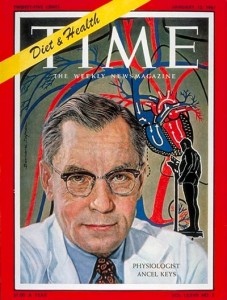 Authors such as Uffe Ravnskov: (The Cholesterol Myths – 1991), Gary Taubes (Why We are Fat – 2011, Good Calories, Bad Calories -2007), Robert Lustig (Fat Chance: Beating the Odds against Sugar, Processed Food, Obesity, and Disease – 2013), John Yudkin (Pure, White and Deadly -1972) argue that cholesterol is not a health issue and concentrate on carbohydrates in the diet. One method of advocating their case is to ridicule the work of Ancel Keys.

Low-carbohydrate advocates claim he deliberately mislead generations of researchers, medical practitioners and the general public by manipulating data to fit his hypothesis and advocating a low fat, Mediterranean-style diet.

A brief biography of Ancel Keys can be found in Dialogs in Cardiovascular Medicine – Vol 13 No 3 that gives a different picture than the deceptive and manipulative researcher than he is portrayed by populist commentators. 1

Below is a brief overview of his life.

Ancel Keys 2 was one of the most famous public health researchers of the twentieth century. He was born in 1904, died in 2004.  Peripatetic for the first third of his life, his outstanding research followed appointment age 36 to the Laboratory of Physiological Hygiene, at the University of Minnesota’s Minneapolis Football stadium.  Born in Colorado, a refugee from the San Francisco earthquake aged 2, he studied chemistry at Berkeley, economics, and political science, earned a master’s degree in zoology, a PhD in oceanography and biology, won a fellowship in physiology to Copenhagen, and did a second PhD in physiology in Cambridge, England, becoming interested in high-altitude physiology.  Offered a permanent post in Cambridge,  he went to study biochemistry at Harvard, and then to the Mayo Foundation, Rochester, Minnesota researching human biochemistry and physiology, before accepting the Minneapolis post in the same university. 3

He pioneered several modern techniques in health and biology including detailed comparisons of whole populations to determine the effects of different lifestyle factors on health.  He demonstrated experimentally that traits heretofore considered irrevocable and constitutional, such as body type, blood fat levels (cholesterol), blood pressure, heart rate, and responses to stress, were, in fact, largely modifiable by simple changes in the composition and quantity of diet and physical activity. 4

His wife, Margaret, was a biochemist and an integral part of his work, She lived 97 years. 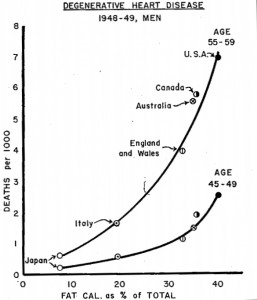 Atherosclerosis: a problem in newer public health 5 was first presented in Amsterdam in late 1952 and later in New York in early January 1953. He stated that the present high rate of death from degenerative heart disease is not inevitable by showing comparisons with other countries.

In the BBC documentary, Robert Lustig claims Keys made his claims regarding saturated fat in the diet as a hypothesis and that he spent the rest of his life trying to justify it. Firstly, at this stage of his research, Keys implicated fat (% calories from fat) as an indicator of heart disease – not saturated fat as Lustig states. Secondly, this paper does refer to his previous surveys and the works of others. He was not relying on only the statistics of the 6 selected countries to make his conclusions.

J Yerushalmy and H Hillboe criticised the paper Atherosclerosis: A Problem in Newer Public Health in the publication Fat In The Diet and Mortality From Heart Disease 6, claiming that Keys only choose 6 countries that supported his hypothesis instead of using the World Health Organisation data from the 22 countries that was available. They state Keys did not give reasons for his selection. This is clearly incorrect. If you read Keys’ paper, Keys did give the reasons for choices. 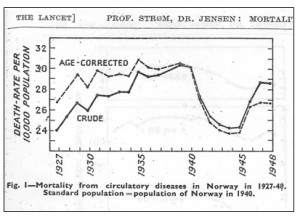 The Scandinavian countries were excluded because of the effects of the World War II. The consumption of meat and eggs dropped during the war and so did the level of heart disease. 7 However, two areas of Finland were included later in the Seven Countries Study. The WHO data shows France as having little heart disease even though it has a high fat consumption, giving rise to the French Paradox myth.  According to a paper in the Dialogues of Medicine – Vol 13 No 3 2008, 8 the French paradox is indeed a myth.

The clear conclusion, driven by the facts as summarized by Pierre Ducimetière, is that the rates of CHD are not so low in France, animal fat intake is not so high, and the diet-heart concept is not so unique that the existence of a “French paradox” can be sustained, except for satisfying cultural fantasy or for wine enthusiasm and marketing. Thus, the real paradox is why the French paradox continues to exist as a concept, when it should be replaced by the less mystifying view, namely, “the more Mediterranean, the better”.

Spain was excluded even though these figures supported the conclusions of the paper.

Mexico did not even have a death certificate system in place.

Yerushalmy and Hilleboe examined the data from all of the 22 countries in the WHO Epidemiological and Vital Statistics 1951-1953 publication.

Note that Keys’s paper was first presented as a talk in Amsterdam in late 1952  Yerushalmy and Hilleboe used WHO data from the years 1951-1953 that was not published until 1956.

Hilleboe later co-authored a paper Risk Factors in Ischemic Heart Disease in Vol 53 No 3 American Journal of Public Health showing that “high cholesterol was the greatest risk factor of any single variable in ischemic heart disease”.

In his conclusion, Keys states that there is sufficient evidence to “warrant a large extension of this type of epidemiological research”. His views were refined with later studies.

Yerushalmy was involved in a dispute with researchers who suggested that smoking caused a reduction in birth weight. His view was that the differences could be explained by ‘mode of life’ differences between smokers and nonsmokers, such as smokers were less likely to use contraceptive methods, less likely to plan the pregnancy, more likely to drink hard liquor, beer and coffee and more likely to indulge in these behaviours to a greater extreme.

Yerushalmy suggested caution in implicating cigarette smoking in the reduction of birth weight.9

Ancel Keys and colleagues posed the hypothesis that differences among populations in the frequency of heart attacks and stroke would occur as a result of physical characteristics and lifestyle and diet. Surveys were carried out between 1958 – 1970 in populations of men aged 40-59, in sixteen areas of seven countries. Follow-up surveys were continued until the 1990s. Most of the areas were stable and rural and had wide contrasts in habitual diet.

Women were excluded because cardiac disease was less common and because of the invasiveness of physical examinations. The Seven Countries Study was the first to explore associations among diet, risk, and disease in contrasting populations.  Central chemical analysis of foods consumed among randomly selected families in each area, plus diet-recall measures in all the men, allowed an effective test of the dietary hypothesis. The study was unique for its time, in standardization of measurements of diet, risk factors, and disease; training its survey teams; and central, blindfold coding and analysis of data.

The study areas were:

A graph from the study shows the relationship between coronary deaths and saturated fats in the diet. 10 Note the difference between East Finland (E) and West Finland (W). 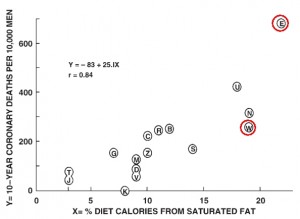 According to Harry Blackburn, one of the collaborators in the study:

The Seven Countries Study provided evidence confirming the original hypotheses, that elevated mean blood cholesterol levels and intake of saturated fatty acids is a major and apparently necessary factor in the population burden of atherosclerotic diseases. Populations with saturated acid intake less than 10 percent of daily energy have little coronary heart disease or thrombotic stroke despite widely varying total fat intake or usual levels of blood pressure or high rates of tobacco use. Multivariate analysis of population rates and risk factors reveal that diet and smoking “explain” most of the differences in population rates and that the “standard” CVD risk factors operate universally within populations.

The main implications of the Seven Countries Study are that the mass burden and epidemic of atherosclerotic diseases has cultural origins, is preventable, can change rapidly, and is strongly influenced by the fatty composition of the habitual diet. The study implies the universal susceptibility of humans to CVD but that the frequency of susceptible phenotypes is greatly reduced in favorable environments. It suggests there may be other and important protective elements in the diet and lifestyles of Crete and Japan. 11