The Keto diet slays the opposition? – not true

An article titled, How the Keto diet – even without exercise – slays the opposition, by Derek Beres was published on Think Big website on 11th December 2017. 1

Derek is a yoga and fitness instructor based in Los Angeles and author of the book Whole Motion: Training Your Brain and Body for Optimal Health. He advocates a diet based on the KETO Food Pyramid. 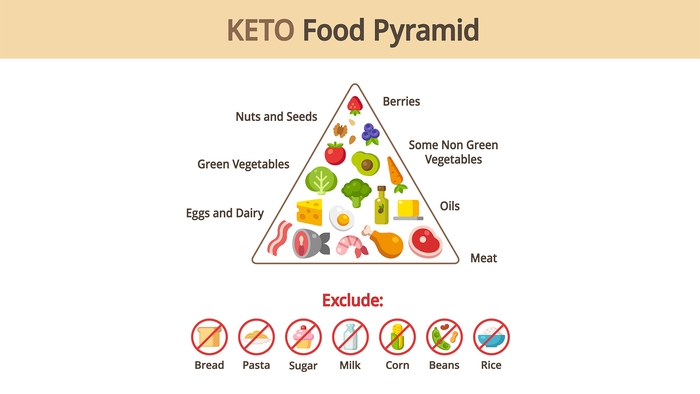 He quotes a study by Gibas and Gibas to support his claim. The Gibas article contends that ketosis is a useful and valid tool to control metabolic syndrome, diabetes and obesity. 2

Metabolic syndrome has not been defined in this paper.

The Adult Treatment Panel (ATP) III, definition that it consists of at least 3 of the following 5 conditions.  3

The references for this paper include a number of authors (J. Volek, R. Feiman, E. Westman) who have received funding from the Robert C. Atkins Foundation which supports research into low-carbohydrate nutrition.

The participants may have been randomly assigned to one of the three groups. However, the baseline measurements for weight were significantly different for the three groups which grossly distorts the results. For example, average weight for the ketogenic diet group was 240 pounds (109 kg) whilst the SAD (without exercise) was 190 pounds (86 kg) and SAD (with exercise) was 175 pounds (79 kg). Values are calculated from the graph as the original data is not provided.

At the start of the trial, the average weight of the ketogenic group was 37% greater than the SAD exercise group and 25% higher than the SAD non-exercise group. Any results from this study are going to favour the ketogenic group as their initial conditions were more extreme. This is sufficient to completely invalidate the study.
The Big Think article states that the Ketogenic diet “slays the opposition”. The Standard American Diet (SAD) was the only alternative that was compared to the Keogenic diet – presumably the same diet that placed the participants in their current state. So the claim that the Ketogenic diet “slays the opposition” is somewhat optimistic given the lack of any credible alternative.

The ketogenic diet consumed by the participants contained less than 30 g/day of carbohydrate. No other details of the diet were described. The alternative diet has not been described at all. The adequacy of a diet cannot be defined in terms of the macronutrient content – that is the proportion of energy obtained from carbohydrate, fat and protein.

The trial only lasted for ten weeks which is insufficient time to adequately assess long-term health outcomes and the criteria recorded to measure the health status of the participants are very selective.

Despite cholesterol being part of the definition of metabolic syndrome, this was not measured.

Seventh-day Adventist’s Studies (and many others) have shown that as the diet becomes more plant-based, the incidence of many ailments including obesity and diabetes decreases. 7

Much publicity is given to the longevity of the people of Japan and Okinawa (an archipelago that stretches from southern Japan to Taiwan). However, the healthiest population on the planet is the vegan Californian Seventh-day Adventists. 8

McDougall showed significant improvement in diabetic and cardiovascular markers after seven days on a low-fat, plant-based diet.  Carbohydrate intake was approximately 80% of total energy with fat representing 10% or less. 9

The diet consisted of no animal-derived products or isolated vegetable oils. Meals included wheat flour products, corn, rice, oats, barley, quinoa, potatoes, sweet potatoes, beans, peas, lentil, fresh fruits and non-starchy green, orange, and yellow vegetables. The macro nutrient profile was approximately 7% fat, 12% protein, and 81% carbohydrate by energy consumption. After seven days, there was a substantial reduction to relevant bio-markers. The reduction occurred even though 86% of patients on blood pressure medications and 90% of patients on diabetes medications reduced their dosage or discontinued the medication.

Examine the extent of the changes that were made on the elevated markers after only 7 days on a low-fat, high-carbohydrate, whole-food, plant-based diet.

Barnard compared a low-fat, plant-based diet to an American Diabetes Association diet. The plant-based diet out performed that ADA diet and showed a significant improvement in all markers measured over the 22 weeks of the trial. 10

David Jenkins, the Toronto-based researcher who created the glycaemic index, and Neal Barnard are amongst the co-authors of a trial studying the impact of vegan diets on the management of type 2 diabetes.

Results were evaluated at 22 weeks and 74 weeks. The results below are from 22 weeks because these results distinguish between those participants that did not reduce their medication so it does not confound the results.

Nine vegan (completion rate 82%) and seven (completion rate 86%) from the ADA diet group did not complete the 74 week program, which is much higher than the completions rates for studies comparing high-fat, low-carbohydrate diets with “low-fat” diets. Note that 16 of the 49 vegan-group participants did not adhere strictly to their diet. Their cholesterol intake was reduced from an average of 291 mg/day to 24 mg/day. The ADA group reduced their intake from an average 317 mg/day to 189 mg/day. A vegan diet contains no cholesterol.

The changes for those who did not change their medications are more relevant as it removes the confounding influences of additional modifications to behaviour.

The Cause of Diabetes

Students were fed their diets four highly improbable diets for two days: a high-fat diet, high-carbohydrate diet, high-protein diet and a fasting diet. A glucose tolerance test was performed on the morning of the third day.

After only two days on their experimental diets, the only group showing a normal, healthy response to the glucose tolerance test was the high-carbohydrate group. Both the high-fat and fasting diet showed – after only two days – a significant increase in insulin resistance.

The relationship between an increase in fats in muscle cells and insulin resistance has been documented since the late 1990s. 13 14

Normally, insulin attaches to protein receptors on the cell’s surface and signals the cell membrane to allow glucose to enter. If there is an accumulation of fat in the cell, it interferes with insulin’s signalling process and glucose cannot enter the cell. Fat can accumulate inside muscle cells even in slim people. The real cause of type 2 diabetes is not an excess of sugar or carbohydrates. It is an accumulation of fat inside the cells that interferes with the muscle cells ability to respond to insulin. The muscle cells are unable to access glucose, which is required for energy production.

Type 2 diabetes does result in an increase in glucose in the blood and urine but this does not mean that type 2 diabetes is caused by a consumption of sugars or carbohydrates.

Derek is the author of Whole Motion: Training Your Brain and Body For Optimal Health. He states that he is working on a new book about spiritual consumerism.

Slaughtering 8 billion animals annually in the US for “food” is not an example of spiritual consumerism.

Consuming animal protein production that requires more than eight times as much fossil-fuel energy than the production of plant protein, is not an example of spiritual consumerism. 15

Consuming beef that requires 100,000 litres of water for every kilogram of food compared with soy production (2,000 litres for kilogram), rice (1,900 litres), wheat (900 litres) and potatoes (500 litres) is not an example of spiritual consumerism. 16

Other posts relating to low-carbohydrate diets and ketogenic diets.