2040 is a documentary by Damon Gameau that targets a young audience to convince them that they can make a difference to planet Earth’s well-being using technology that we already have at our disposal.

The key areas addressed in the documentary are:

In slightly more than 20 years, by the year 2040, sufficient change has occurred to save the Earth from environmental disaster which appears inevitable.

Solutions proposed by 2040 that individuals can implement.

Dr Henning Steinfeld is an agricultural economist working at the UN as the head of the livestock analysis and policy section. In 2005, he was the lead author of a 400 page UN report Livestock’s Long Shadow. 1

Animal agriculture is responsible for 18 percent of the world’s greenhouse gas emissions which includes CO2, methane and ammonia.

Livestock grazing accounts for 26% of the available surface of the planet. Area dedicated to producing feed crops for these animals amounts to 33 percent of the total arable land.

Clearing forests to create new pastures is a major source of deforestation. 70% of former rainforests in the Amazon have been turned over to grazing.

The livestock is the most serious users of the earth’s scarce water resources which disturbs water cycles. Significant amounts of water are withdrawn for the production of feed.

Livestock is also an important contributor to biodiversity loss.

An important contribution of livestock’s over-exploitation consists in the production of fish-meal for livestock feed. 7 of the 10 most fished species, 2 accounting for 30 percent of the world total marine capture fisheries production, are either fully exploited or over-exploited – not sustainable.

Nitrogen and phosphorous from agriculture into waterways and oceans is still increasing with mangrove forests, coral reefs and sea grass beds being severely affected. Sea grass beds are very important nurseries for many species including fish, turtles and large mammals (dugong, manatee). Sea grasses environments are under threat in the Caribbean, Gulf of Mexico, the Mediterranean, both sides of the Northern Pacific, large areas of the Indo-Pacific region and extensive areas of Northern Australia.

80% of the world’s fish stocks are fully exploited or over-exploited. 3

In 2006, 36% of the total world fisheries catch was destined for non-food use. It was used for fish meal and fish oil for animal foods. 4

These small pelagic (open ocean), low-value fish form the bulk of fisheries catch destined for non-food uses with the aquaculture sector being the largest consumer utilising 26% of the total catch. These are often taken as a by-catch of fishing operations and varies depending upon location and season. Most of these small pelagic fish (73%) are anchovies, sardines, herrings, pilchards and related fish. Several species are either fully-exploited or over-exploited. 5

Substantial subsidies are being paid to increase the catch of a dwindling resource that is under severe threat.

The 2040 documentary shows black and white Holstein-Friesian cattle contentedly grazing. The next step, where that cattle are headed for the abattoir, is avoided. Apart from the unnecessary suffering, there is a substantial increase in the transport costs, utilisation of water and the disposal of waste products.

World-wide, this was the fate of billions of animals in 2016.

Most of the grains grown in Australia is produced for export and for the feeding of livestock. 7

Why grow wheat, corn and soy to feed cows, then kill the cow and eat the meat when it is much more efficient to eat the corn?

Below is a graph showing the consumption of water in producing our food. 8 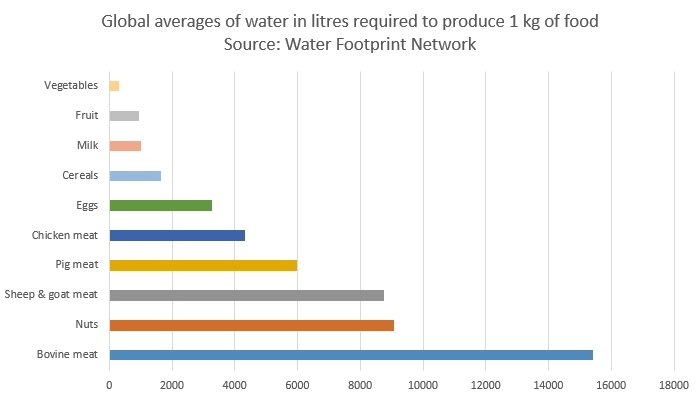 A Taiwanese Buddhist study 9 with 4,384 participants compared type 2 diabetes outcomes for vegetarians (vegans and lacto-ovo-vegetarians) compared with those who ate fish and meat. The meat-eating group ate only a very small amount of meat.

There were insufficient numbers to divide the vegetarians into subgroups (pesco, lacto-ovo, vegan). There were 69 vegans (no animal products) and there were no cases of diabetes within this group.

Three garden peas weigh a gram. One Big Mac, with 2 meat patties, contains 90 g of meat—so the participants were consuming only a very small amount of meat.

That minute amount of meat increased the risk of diabetes 4 times for females and 2 times for males.

A strong commitment to health has been a part of Adventist’s tradition since its founding in the 1840s.

The comparison of the types of diet (in the AHS-2 study) showed a significant difference in both the body weight and the incidence of Type 2 Diabetes. 10

Much publicity is given to the longevity of the people of Japan and Okinawa (an archipelago that stretches from southern Japan to Taiwan).

However, the population with the longest lifespan and the highest levels of health on the planet is the vegan Californian Seventh-day Adventists. Californian Adventists have a higher lifer expectancy at the age of 30 years than other white Californians by 7.28 years in men and 4.42 years in women, giving them perhaps the highest life expectancy of any formally described population. 11

Note that Californians are much healthier than the average American being in the top five states for longevity with an average life expectancy of 5-6 years greater than the Mississippi states.

The solutions proposed in 2040 are an encouraging step towards a viable and sustainable future. Much, much more needs to be done with a greater sense of urgency than is shown in the movie. Billions of dollars is spent annually to ensure that industries, corporations and governments remain unaffected and unchanged despite increasing evidence and pressure that we need to run full tilt towards a sustainable future.

A truly sustainable agriculture is best not only for our environment, but our health and the animals that we share the earth with.
PDF