There are thousands of medical and scientific papers in peer-reviewed journals showing that a whole-food, plant-based (WFPB) diets are optimal for our health and are also the best for the environment and for the animals we share the earth with.

A number of these studies are documented on this website.

There are many more studies purporting that eggs, dairy, chocolate and even red meat are healthy and even essential for health.

When a comparison is made between two or more groups of people, showing that healthy WFPB are detrimental, be mindful of the nature of the comparison group.

Almost invariably those studies justifying a high-fat, high-protein, animal-based diet have the comparison group as a “low-fat” diet of approximately 30% which is not a low-fat diet. The participants are very overweight with an average BMI of over 25 (overweight) or even over 30 (obese) BMI. These people are usually placed on energy-restricted diet that makes them feel miserable – no-one likes to be starved. At the end of the study, which is usually short term period, the participants of both groups are still unhealthy.

Other studies claim that vegetarians or vegans only appear to be healthier because of other lifestyle factors. They are more likely to exercise, smoke and drink less alcohol and are less likely to be overweight. It is claimed that these factors are more important than being vegetarian of vegan.

These “researchers” seem to forget that diet does determine how much you weigh. It is NOT an independent factor. If you are NOT overweight, you are more likely to be involved in physical activity.

One other trap in choosing a normal western population as the comparison group is that it is normal to die of heart disease, stroke and cancer. Unfortunately the high prevalence of autoimmune diseases, high-blood pressure and diabetes is normal.

The Multiple Risk Factor Intervention Trial (MRFIT) was a coronary heart disease prevention trial that was conducted at 22 US clinical centres (18 cities) from 1973 to 1982. The multiple risks evaluated were:


There were 356222 men aged 35 to 57 years that were initially screened by the MRFIT program in its recruitment program.

This provided researchers with a group that had standardised serum cholesterol measurements and long-term (6 years) mortality follow-up.

For these men that were initially screen for the MRFIT cohort, low risk was defined as:

Only 2% of the men in the MRFIT cohort met these rather modest criteria. Only 6 of these men died from CHD during the 6-year follow-up, and the CHD death rate was 87% lower than for the rest of the cohort. 1

These days more realistic goals are:


This somewhat uncommon group of people is a more realistic comparison group than a normal sample.

The Recommended Dietary Intake (RDI) of protein is 0.84 g/d for adult males and 0.75 g/d for adult females. This results in the RDI for protein being approximately 8-10% of energy intake.

Many people, including dieticians and doctors, assume that the RDI is the minimum amount of nutrient that we need. The RDI is two standard deviations above the estimated average requirements. This means that the RDI meets of exceeds the needs of 97.8% of the population.

There is no need to have “a little bit more, just to be safe”.

The consumption of protein in all five categories significantly exceeds the RDI for protein.

Eating more protein than required is not beneficial— it is has a negative impact.

Below are some observations relating to these findings.

The graph below show improvement in:


as the diet increases in plant protein. 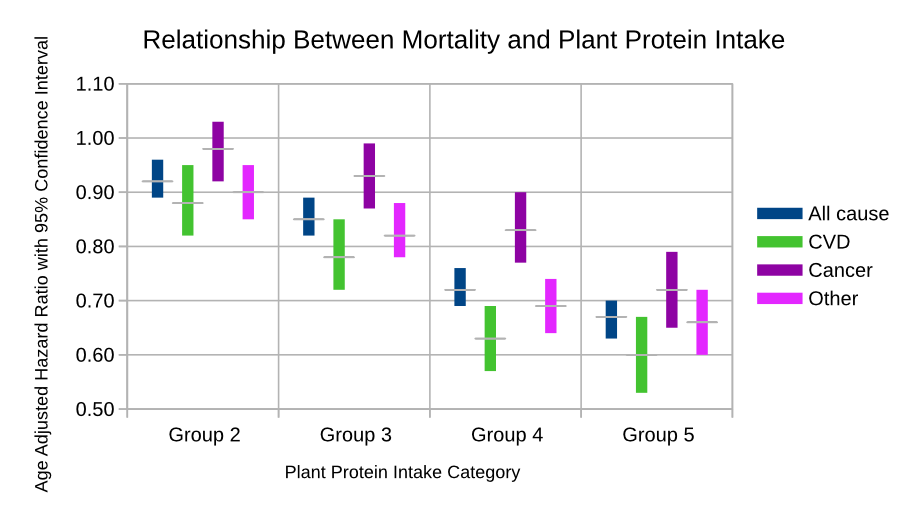 Whilst there are significant improvement in mortality, if the comparison group is a true whole-food plant-based diet group then results are much more impressive.