Popular commentators often contend the The Enlightenment and The Age of Reason was accompanied by a loss of connection with our emotional and intuitive instincts resulting in a purely mechanical view of nature and the universe.

Galileo Galilei (1564-1642) is one of the modern instigators of the “Age of Reason” although similar sentiments can be found in other cultures such as ancient Greece and Islamic civilisations. He believed that knowledge must be found in sensory experience – in observation. However, he was aware that our senses can be deceived. He was a supporter of Nicolaus Copernicus’ (1473-1543) view that the sun was at the centre of the solar system even though each day we see the sun rise in the east and set in the west.1

The view that planets revolved around the sun originated in ancient Greece. Aristarchus of Samos (ære star kas) (310 BCE – 230 BC) was an ancient Greek astronomer and mathematician  who lived more than a century after Socrates and Plato. He proposed that the Earth rotated about its axis and revolved around the sun as did Seleucus of Seleucia (190 BC – c. 150 BC). They also believed that the sun was just another star.

In January 1610, Galileo discovered the four largest moons of Jupiter. Existing beliefs maintained that all heavenly bodies should circle the earth. This revolutionary observation no longer placed us at the centre of all creation.

It was not until 1616 that having a belief that earth was not centre of all creation was condemned. After this point, it was heretical to defend or even discuss Copernicus’ model of the solar system. In 1633, Galileo was sentenced to house arrest for the rest of his life and the publication of his works were banned.

As Galileo wrote in a letter the Grand Duchess Christina of Tuscany:


But I do not feel obliged to believe that that same God who has endowed us with senses, reason, and intellect has intended us to forego their use. 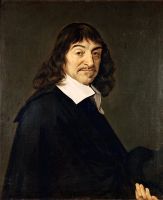 This was an age where if you swore at a neighbour and something bad happened, you could be in big, big trouble. Given the times, it was very likely that something bad would happen. In Scotland, a village herbalist collecting dew-drenched flowers by the light of the full moon was considered to be a witch, a pagan which could result in being shoved into a barrel with protruding metal spikes, her body ripped to shreds as she was rolled down a hill – surely it is better to suffer momentarily on earth than to spend eternity in hell.

Descartes’ “goal was not to discover a multiplicity of isolated truths. Descartes therefore included in his philosophy metaphysical and physics and natural science. He included anatomy, medicine and morals. […] According to Descartes, all the sciences are interconnected and must be studied as a single entity.”3

When Descartes was 23, he was camped by the Danube as a non-military participant in the Thirty Years War. On the night of 10th-11th November 1619, he had three powerful dreams that not only changed the direction of his life, but western philosophy and science. 11th November is St. Martin’s day – a day that appears in a number of significant events in Descartes’ life.

Treating people by bleeding was standard medical procedures in Descartes’ time. At the age of 53, Descartes moved to Protestant Sweden to become a tutor to Queen Christina. Five months after his arrival, he become seriously ill with pneumonia. The treatment for all illness at the time was bleeding. Descartes had dissected many animals that he obtained from the local butcher in the Netherlands. (He did not eat meat and very rarely drink wine.) His knowledge of anatomy was extensive for the time and he was aware that bleeding was dangerous and possible fatal. His view was that “bleeding shortens the days.” He refused the treatment of bleeding – much to the disgust of Queen Christina’s physician. Descartes died after appearing to recover on his preferred treatment of “broth, water and rest”. Queen Christina’s physician “wanted to see Descartes dead” and it is possible that he was involved in Descartes’ death by poisoning. Being a Catholic that had a great deal of influence over the queen generated a great deal of hostility in Christina’s Protestant court. Bleeding was still a valid treatment 140 years later. Mozart was bled at the time of his death in 1791.

Rosicrucians (Brotherhood of the Rosy Cross) arose in the early 17th century in Germany. It was a secret society which wanted to transform all aspects of society – science, mathematics, art, religion and politics through the exploration of esoteric knowledge. This was a time of bitter and bloody wars, primarily driven by divisions in between Catholic and Protestant religions. They believed that all knowledge was interconnected and could not be divided into discrete categories. Geometry, mathematics and alchemy were a foundation of their study.4

It is not known if Descartes was a member but he was certainly in contact with members and was deeply influenced by their thoughts. A secret, coded notebook was discovered after Descartes death. It was decoded by the brilliant German mathematician, Gottfried Liebniz. His coded notebook contains alchemy symbols. Descartes desired to combine ancient Greek geometry with mathematics. It is clear that Descartes had discovered the relationship between the vertices, edges and faces of the Platonic regular solids which was later rediscovered by Leonard Euler – that is, the number of faces plus the number of vertices equals the number of edges plus two. Descartes later found this formula worked for any polyhedra – not just the five regular Platonic solids. Descartes believed this discovery was very significant – far beyond the simple geometrical relationship. Why did Descartes think this esoteric knowledge to be kept secret? One reason is that Johannes Kepler linked these regular solids with Copernicus’ cosmology of placing the sun at the centre of creation. Revealing his discovery, would have roused the attention of the Catholic Inquistition – a fate worth avoiding.

Giordano Bruno (1548-1600) was a Dominican friar and mathematician. As well as accepting Copernicus’ view that the earth and planets revolved around the sun, he also believed that the sun was simply another star and stars were surrounded by planets and that could be inhabited. He believed that the universe was infinite and did not have a centre. People on other planets could make the same mistake as we do – thinking that they are the centre of all creation. After spending 7 years in prison, Bruno was burnt to death in 1600 for his heretical views.5

Marianne William’s contention that “Descartes, Galileo and even Darwin viewed the body as a machine with levers that you can use to make adjustments” does not correspond to their beliefs and views. The time of Galileo and Descartes is a alien world – full malevolent spirits, virulent illnesses such as bubonic plague that resulted from divine displeasure and ordinary folk were at the mercy of climate and warring rulers. Religious fervent resulted in bloody religious wars and the church exploited the fears of population to control their subjects. All that Galileo, Descartes and others advocated was an examination of existing knowledge to verify if it really was true.

When there is a discrepancy between our beliefs and reality, often our beliefs take precedence. We cling desperately to what we wish to believe – even in the face of overwhelming evidence to the contrary. Call it logic, common sense or whatever term you wish to use, but we need to be able to subject our beliefs to some scrutiny.

If we take a narrow view of the world when making decisions, it is not necessarily a failure of logic and reasoning. It is a failure to comprehend the interconnectedness of all aspects of life.