Edward Lorenz was a mathematician and meteorologist. Whilst his name may not be familiar, you would have heard about the results of his work.

He was born in 1917 in Connecticut, USA. He was by all accounts a brilliant mathematician who was fascinated by astronomy and weather as a child.

During World War II, he obtained his master’s degree in meteorology and was posted to Saipan and Okinawa as a weather forecaster with the Air Force.

Whilst he is best known for his work on Chaos Theory, he made very valuable contributions to other areas of mathematics including climate theory.

By the 1960s, he had developed a mathematical model for weather forecasting involving 12 parameters such as temperature, pressure, wind speed and direction on a small, “personal” computer. The story of the butterfly effect originated when Lorenz re-entered the data for a weather simulation. When he came back from coffee, he discovered that the results for the first run were completely different from the second run. The results coincided for a time then diverged significantly.

The reason, he discovered, was that he entered the data from a printout that used three decimal places whilst the original data used six decimal places.

One meteorologist, Phil Merilees, remarked that if the model was correct, one flap of a seagull’s wings could change the course of weather forever.

Lorenz presented a paper at a meeting of the American Association for the Advancement of Science in December, 1972 in Washington, DC. It was Phil Mears who devised the title – Does the flap of a butterfly’s wings in Brazil set off a tornado in Texas?. The seagull was transformed into a more poetical butterfly, and he deliberately chose “butterflies” and “Brazil” along with “tornadoes” and “Texas” because of the effect of alliteration. Phil wrote, “I suppose a seagull in Senegal might have worked as well.” Probably not.

The title was a question. The answer is – of course it does not. If it did we would be creating tornadoes every time we clapped our hands. Lorenz conclusion was that long-term weather forecasting was doomed.

The Butterfly Effect refers to mathematical models of the weather – not to the actual weather.

Lorenz believed that more accurate weather forecasting could be achieved by combining statistical methods with that of mathematical modelling.

In 1898, William Franklin was a professor of physics at Lehigh University, Bethlehem, Pennsylvania. Whilst discussing the problem of the sensitivity of the atmosphere to small perturbations, Franklin wrote,

Long range detailed weather prediction is therefore impossible, and the only detailed prediction which is possible is the inference of the ultimate trend and character of a storm from observations of its early stages; and the accuracy of this prediction is subject to the condition that the flight of a grasshopper in Montana may turn a storm aside from Philadelphia to New York.

The comments regarding seagulls, grasshoppers or butterflies are pointing out the limitations of mathematical modelling when dealing with non-linear systems. A storm in New York or Texas has nothing to do with a grasshopper in Montana or a butterfly in Brazil. The problem of accurate, long-term weather forecasting has been recognised for some time – and seagulls, grasshoppers or butterflies are not part of the problem or solution. 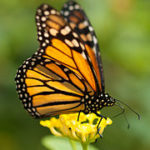 One of the most spectacular events that we can imagine involves real butterflies. Every autumn in North America, millions, upon millions of monarch butterflies fly from northern United States and southern Canada to winter in a few mountain tops of Sierra Madre Mountains in central Mexico – a journey of 3,000 km.

Next spring, the butterflies fly north. Whilst one generation makes the journey south, it is butterflies three or four generations later that return to their summer home in northern America.  In autumn, the great-great grandchildren return to the same mountain-top location in Mexico that their ancestors left the previous year.

No doubt butterflies can help transform our world but it is not because of the flapping of one butterfly’s wings in the depths of an Amazonian clearing.

Belief versus Truth
But we are all individuals