Diet Does Not Affect Breast Cancer?

The objective of The Women’s Healthy Eating and Living (WHEL) Randomized Trial was to: 1

Assess whether a major increase in vegetable, fruit, and fiber intake and a decrease in dietary fat intake reduces the risk of recurrent and new primary breast cancer and all-cause mortality among women with previously treated early stage breast cancer.

The conclusion of this “controlled trial of dietary change in 3088 women previously treated for early stage breast cancer” was:

Among survivors of early stage breast cancer, adoption of a diet that was very high in vegetables, fruit, and fiber and low in fat did not reduce additional breast cancer events or mortality during a 7.3-year follow-up period.

The study was a randomized controlled trial of dietary change in 3088 women previously treated for early stage breast cancer who were 18 to 70 years old at diagnosis. 2 3 4

The intervention group consisted of 1,537 women randomly assigned to receive a telephone counselling program supplemented with cooking classes and newsletters that promoted daily targets of 5 vegetable servings plus 16 oz (470 ml) of vegetable juice; 3 fruit servings; 30 g of fiber; and 15% to 20% of energy intake from fat.

The comparison group consisted of 1,551 women who were provided with print materials describing the “5-A-Day” dietary guidelines.

This made headlines all over the world. This is the proof people were waiting for – that changes to your diet has no impact on breast cancer. Medical practitioners, dieticians and the public now have the evidence that changing your diet is not helpful in recovery from breast cancer.
The authors claim that the diet is “very high in vegetables, fruit, and fiber and low in fat”. The assessment criteria is to determine the effects of “a major increase in vegetable, fruit, and fiber intake and a decrease in dietary fat intake”.

Let’s look at the figures from the paper. The column Change is the change from Baseline to 72 months.

It appears that the authors are deliberately being deceptive. The study states that:

At 4 years, relative differences in mean intake between study groups were 65% for vegetable servings, 25% for fruit servings, 30% for fiber, and −13% for energy intake from fat.

It is important to note that the reported values are averages. If the goal is to reach a particular outcome, such as a recommended fiber intake, then all participants should be meeting the target.

The conclusions this long and expensive study is not supported by the evidence presented. The reason that the study did not show any significant findings is because there were no significant changes to the women’s diet.

The Harvard Nurses’ Health Study is another famous study that showed diet did NOT have an effect on breast cancer. Nearly 90,000 nurses were studied for 20 years. They were divided into 10 groups based on the fat intake as a % of energy. The group with the lowest fat consumption ate less than 20% fat with the highest group consuming more than 49%. However, the risk of breast cancer remained the similar in the 10 groups.

The study did show that:

Once again the study is comparing different versions of an unhealthy, high-fat, high-protein, high animal-based diet and finding out that that there is no real difference in the outcomes.

Below is a graph from the paper Fat and Cancer 5 by Kenneth Carroll. 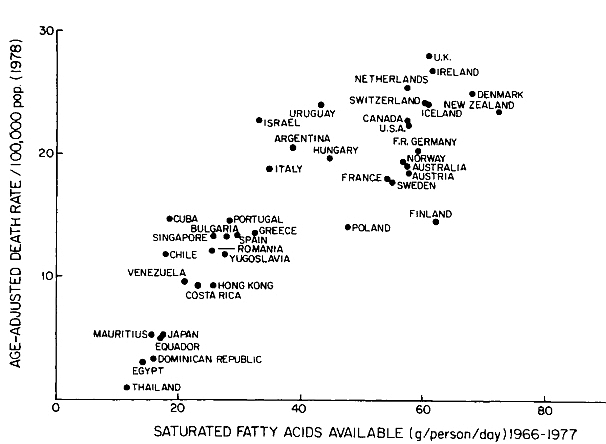 It shows a strong correlation with saturated fat intake and death rate from breast cancer.  However, the emphasis that fat and fat alone is implicated in breast cancers is a mistake.  It is important to note that there is: