Pink Day is one day in October which is designated to create awareness of breast cancer and to raise money for research.

Lifetime exposure to estrogen is 2.5-3 times higher in Western women than rural Chinese women in the 1980s. 1 Chinese women reach menarche later, menopause earlier and have reduced levels of estrogen, progesterone and testosterone during their reproductive years.

There is much evidence that increased levels of estrogen, progesterone and testosterone are associated with a significant increase in breast cancer as well as evidence that low-fat, high carbohydrate diet reduces the level of these hormones.2 3 4 5 6

Why take anti-estogen drugs when it is much easier to reduce the amount of estrogen by consuming a low-fat, high-carbohydrate, plant-based diet?

The recipe book, instead of assisting people to overcome cancer, is actually encourages a diet that is promoting cancer.

There is a good correlation with the consumption of milk and breast cancer. This does not mean that milk causes breast cancer. However, a diet high in milk is often high in fat, saturated fat and animal protein. The graph shows “western” countries and a number of Asian countries. The diet in Asian countries has become more western in recent decades.9 10 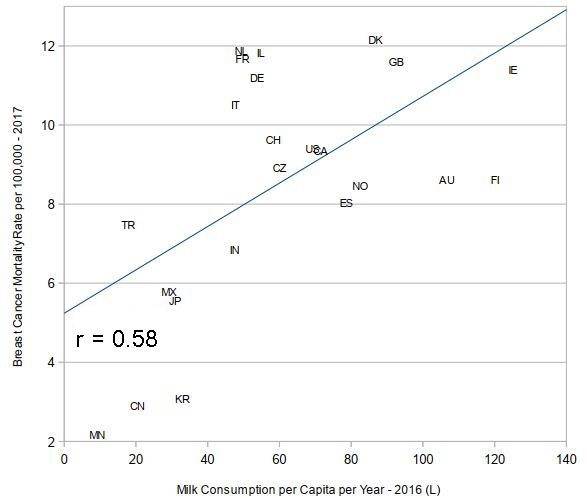 Walter Willet, the famed Harvard epidemiologist and former director of the Nurses’ Study stated in a New York Times interview,

If you step back and look at the data, the optimum amount of red meat you eat should be zero.12

Eric Rimm, another researcher from the Harvard School of Public Health, stated:

But avoiding it [trans-fats] if at all possible is ideal.We can’t tell people to stop eating all meat and all dairy products. Well, we could tell people to become vegetarians. If we were truly basing this only on science, we would, but it is a bit extreme.13
There is much evidence that a whole-food, plant-based diet – that is, a diet low in fat, saturated fat and animal protein, substantially reduces the risk of not only breast cancer, but prostate and colon cancers.