Changes to our Health Indicators

Many of our health indicators have become worse over the past few decades (2000-2020). There has been a decrease in the United States in life expectancy. Below are some of the indicators that have been reduced, resulting in a society that is becoming increasing unhealthy and is placing an unsustainable burden on the families and health care facilities.

The prevalence of many cancers have continued to rise. The mortality rate for all cases of cancer has risen for females. It has decreased for males because of the reduction in lung cancer. 1

Pancreatic cancer, has a lower prevalence rate but has a high mortality rate, continues to rise unabated. 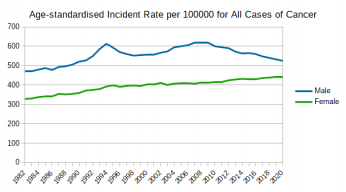 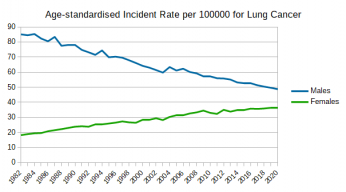 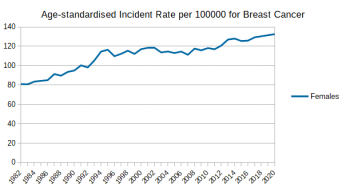 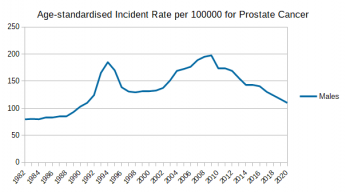 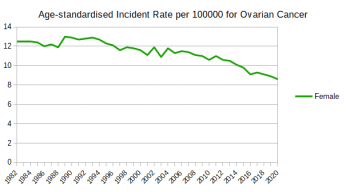 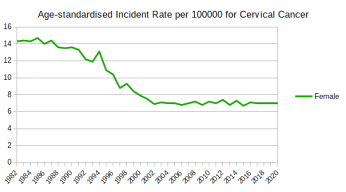 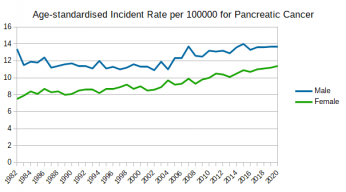 34% of adult Australians have hypertension (greater than 140/90 or taking medication). 3 According to the Framingham Risk Assessment calculator, a systolic value of less than 120 mmHg is ideal.

Below is a selective list of autoimmune diseases and their prevalence 4 in the United States.

Autoimmune diseases cumulatively affect 5-10% of the industrial world population and are a significant cause of morbidity and mortality. 5

World-wide, the incidence of autoimmune diseases is increasing at the rate of 19% each and every year. 6

There are a number of island nations that are too small to show on the map, most notably islands in the Caribbean and Pacific. A full list of countries, denoted by ISO country codes, is found in the following footnotes. 8 9

There is a much greater variation with the prevalence of multiple sclerosis. 10

There is much evidence that Parkinson’s Disease is an autoimmune disease. 12

A 2018 paper, The Emerging Evidence of the Parkinson Pandemic, 13, states:

Neurological disorders are now the leading source of disability globally, and the fastest growing neurological disorder in the world is Parkinson disease. From 1990 to 2015, the number of people with Parkinson disease doubled to over 6 million. […] For most of human history, Parkinson has been a rare disorder. However, demography and the by-products of industrialization have now created a Parkinson pandemic that will require heightened activism, focused planning, and novel approaches.

5.3% of Australian adults aged 18 and over had type 2 diabetes in 2017–18. Diabetes is the fastest growing chronic condition in Australia, increasing at a faster rate than other chronic diseases such as heart disease and cancer. 14

Between 25% and 35% of Australians diabetics report some form of diabetic retinopathy. 15

Dementia is a syndrome in which there is deterioration in memory, thinking, behaviour and the ability to perform everyday activities.

It is not a normal part of aging. 50 million people world-wide have dementia with nearly 10 million new cases every year.

Alzheimer’s disease is the most common form of dementia contributing 60–70% of cases. 16

In 2016, the global number of individuals who lived with dementia was 43·8 million which increased from 20.2 million in 1990. This represented an increase of 117% in 16 years. Dementia was the fifth leading cause of death globally accounting for 2·4 million deaths. This could be attributed to modifiable risk factors of high BMI, high fasting plasma glucose, smoking, and a high intake of sugar-sweetened beverages. 17

The Centers for Disease Control and Prevention (CDC) monitors the prevalence of autism in 14 states of the US for children with autism at 8 years, as this is the age of peak prevalence. It is not a representative sample of the US. The reference area represents 9% of the US population of the same age. 19

Median age at diagnosis in the reference area is 53 months which is less than the median age in the total US population.

Rates of autism have been rising dramatically. The 2010 rate is:

In the US, life expectancy declined for 3 consecutive years (2015-2017) due primarily to an increase in mortality among working-age adults (those aged 25-64 years). Although the increase in mortality was first described among white middle-aged adults, mortality is now increasing among young and middle aged adults and in all racial groups. This increase in premature death, claiming lives during the prime working ages, has important implications for individuals, families, communities, employers, and the nation.

The recent increase in mortality among working-age adults shows no signs of receding. Obesity rates are unrelenting, drug-and alcohol-related deaths and suicide rates, already high among working-age adults, increased during the COVID-19 pandemic, and the latter has made socioeconomically and racially marginalized groups even more vulnerable. 20

I suspect that our health indicators have drastically fallen in recent years across most categories is due to the success of popular commentators, such as Gary Taubes, Nina Teicholz, Arne Astrup, Robert Lustig, Aseem Malhotra, Maryanne Demasi and Bradley Johnston. The food industry spends billions of dollars on questionable research and advertising to ensure that they maintain an growing market share in a saturated market.

The media eagerly reports any evidence of conflicts in medical advice, resulting in headlines such as:

In the food sections, it is very rarely that there are any healthy recipes – the majority of pictures show meat, eggs, fish, chicken, cheese and even gourmet hamburgers with sweets full of sugar and cream.

When McDonald’s run marketing campaigns for vegetarian meals, it results in an increase in the sales of hamburgers – not veggie burgers.

An article Made for Locals, in the Food & Drink section of the Newcastle Herald on 22nd May 2021, wrote about a newly opened restaurant, Lock’s Paddock, that specialises in cured meats and “theatrical” cheese-wheel pasta. The carbonara with mushroom, speck and fusilli pasta and cacio e pepe with truffle pecorino and spaghetti are served at the table. The carbonara and spaghetti in the cheese wheel are the most popular dishes. The carbonara refers to cured pork.

Egg consumption in Australia reached a high point in the early 1970s and decreased substantially until the early 2000s. 22

Whilst egg consumption has not reached the highs from the early 1970s, it has steadily increased since the early 2000s due to successful marketing campaigns by the Australian Eggs, such as “Eggs are OK everyday” and research funded by the poultry industry.

34% of adult Australians have hypertension (greater than 140/90 or taking medication).  24

According to the Framingham Risk Assessment calculator, a systolic value of less than 120 mmHg is ideal.

5.3% of Australian adults aged 18 and over had type 2 diabetes in 2017–18. Diabetes is the fastest growing chronic condition in Australia; increasing at a faster rate than other chronic diseases such as heart disease and cancer. 25

Between 25% and 35% of Australians diabetics report some form of diabetic retinopathy. 26

Something is seriously wrong and the situation is becoming worse.

The strategies to change people’s health and behaviour over the past decades have not worked. It is time to do something differently.